Great Cheverell is a thriving Wiltshire village on the edge of the northern greensand escarpment of Salisbury Plain with chalk hills gently rolling down into the fertile Pewsey Vale.

The parish has approximately 1800 acres of land in an uneven linear strip.

The village has a successful blend of old and new housing and can boast a host of facilities which creates a real community, such as a primary school, public house, shop and post office, garage and even a hairdressers.

Great Cheverell is not just a picture postcard impression of the quintessential English village, it is an authentic example.

A bit of History


'Great Cheverell' is roughly translated from Old English to mean ‘Land of the Goats’. However an accurate description would involve sheep rather than goats as Great Cheverell sits on the edge of Salisbury Plain synonymous with sheep farming and subsequently the wool trade for centuries. Also sometimes referred to in the parish by the latinised name of Cheverell Magna, is known to have existed since Saxon times although evidence of inhabitants have been found for approximately three thousand years previously. The village is mentioned in the Doomsday Book and other medieval documents, when it belonged to Ernulf of Hesdin.

The Manor is mainly of Queen Anne design and includes an octagonal court house, with cells to detain the guilty beneath, as well as a water trough to punish women by dipping. The Church has a chancel with a north vestry, nave with north chapel, south porch and west tower. Some parts are believed to date back as far as the eleventh century with thirteenth and fifteenth century additions.

In 1705 the church was dedicated solely to St Peter. The first schoolroom was in the church - many initials were scratched into the walls between 1579 and 1680. The first school was built in 1844, now The Old School Nursery. The present primary school opened in June 1980.

The Bell Inn public house was purpose built in the 1740s complete with taproom and cellar and externally has not changed much since then. 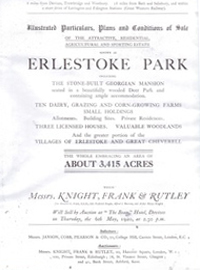 In the eighteenth century the village was predominantly part of the Erlestoke Park Estate owned by the Watson -Taylor family, whose wealth was bolstered by the slave trade in Bristol.

The estate was broken up and much of the village was sold at auction by Messrs Knight, Frank and Rutley in The Bear Hotel in Devizes on the 6th May 1920. Most of the notable houses sit within the conservation area - along the High Street and Church Road; Laurel House, Glebe House, Manor Farmhouse, Highfield House, The Dutch House and Manor House.

Many of the cottages lining the roads were originally copyhold farmhouses, built and inhabited before the Act of Enclosure was enforced - those that survive today became part of landowners estates and tenanted to provide them with valuable rents.

The many properties within the village which contain the name 'bell' in their title is not by accident. The village was famous for making sheep and cow bells during the eighteenth century, exporting them all over the world.

A tenuous literary claim to fame is that the Reverend W Awdry (author of Thomas the Tank Engine) was curate here in Great Cheverell until a sermon in 1939 caused great consternation for being considered to be pro-German, he then moved on to be curate at nearby West Lavington.

In the 1950s the village had a prized Silver Band led by Bert Ridout whom gained great local acclaim, playing at the Bell Inn Club Room before the skiffle bands took over.

The village has always moved with the times with examples of housing built in every decade over the last century. The first council houses were built in 1920 at Townsend. The latest development was Witchcombe Close in the late 2000s, which allowed the village to resurrect The Pavilion; the original Pavilion having been demolished in the 1990s.